Al had a 3-day weekend so we decided to take the opportunity and head to Paris for the long weekend! We drove, as it was only 4 1/2 hours away and the hotel we chose had parking. We didn't try to jam-pack the weekend because Paris is close enough that we know we'll be back. We arrived Friday late afternoon and started our "weekend in Paris" ....

Friday Night: We walked from our hotel along Champs Elysees to the Arc De Triomphe. We didn't "go in", just viewed it from the exterior. Then we took a nice stroll toward the Eiffel Tower and found a playground along the way for Kelty to burn off some energy. Our first view of the Eiffel Tower was from Trocadero Square. We grabbed a hot dog for dinner and chased Kelty around the grass; took a ride on a carousel and then headed to the Eiffel Tower for a view from the second level ... we didn't go to the top ... we took advice that the best views were from the 2nd level so we were content with that. We were on the Eiffel when they lit it up for the night ... it was amazing! Around 9:30pm we left and took the metro back to the hotel, found a market that was open, grabbed a sandwhich and salad for dinner and sat on our hotel room balcony and ate dinner with a view of the Eiffel. 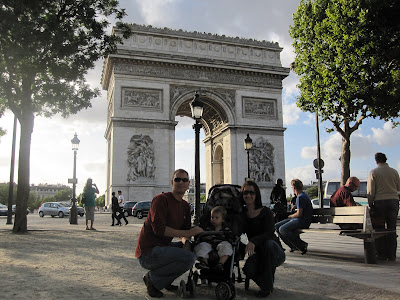 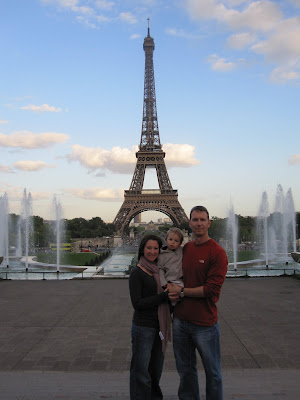 View of the Eiffel Tower from Trocadero Square 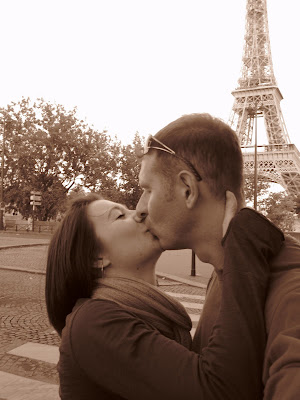 Well, you HAVE to kiss in front of the Eiffel Tower when in Paris! 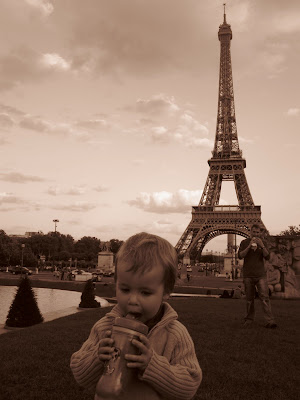 Kelty drinking his milk and daddy eating his hot dog

Saturday: We started off our morning with a Metro ride to Notre Dame. Again, we didn't go in but we hung out in the square for a while ... Kelty fed the pigeons and Al and I did our best to avoid the plethora of gypsies begging for money. After our brief visit we walked to Luxembourg Garden so Kelty could run and play for a bit. Al and I grabbed sandwhiches and chased Kelty (again). The park was huge and also had a dedicated children's play area. After a couple hours we headed back to the hotel for Kelty's nap ... he slept for 3 hours! After his nap we headed out to Pompidou Center where Kelty got a kick out of the "street acts". He met a little girl who was 2 days older then him and ran around the square while Al and I took turns drinking wine/beer and following him around. After our little break we took an evening walk around the Louvre ... Paris at night was amazing and the favorite part of our trip. 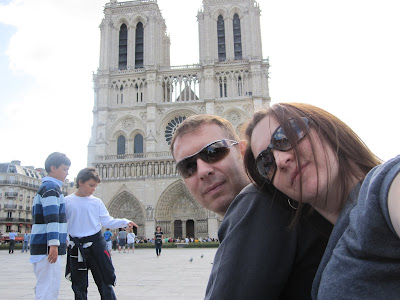 Too many gypsies around to trust anyone with the camera in front of Notre Dame ... extend the arm .. smile ... click! 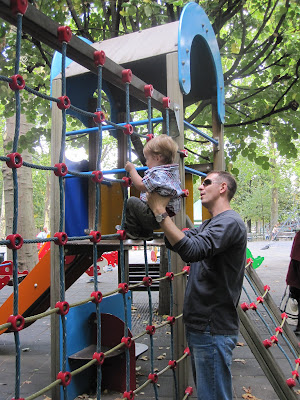 Cimbing in the children's play area in Luxembourg Gardens 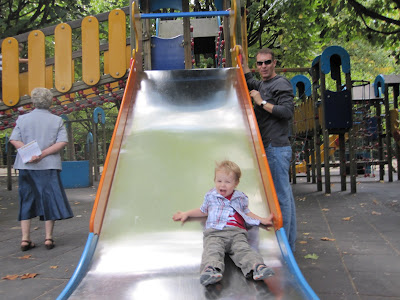 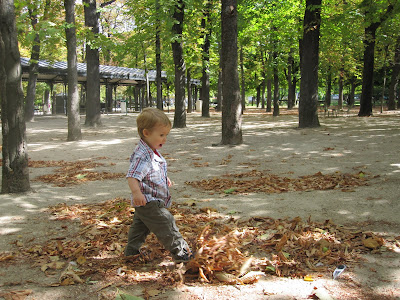 Kicking leaves and getting dirty 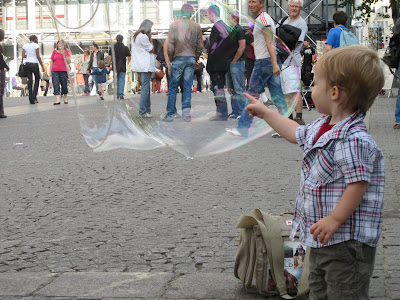 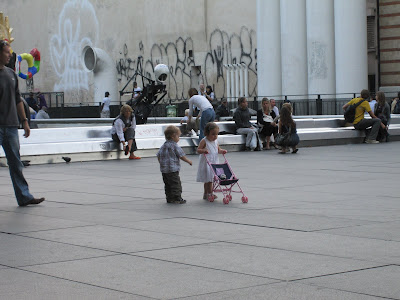 Kelty gave the little French girl his teddy bear to push in her stroller ... awww ... he's already trying to romance the little girls! 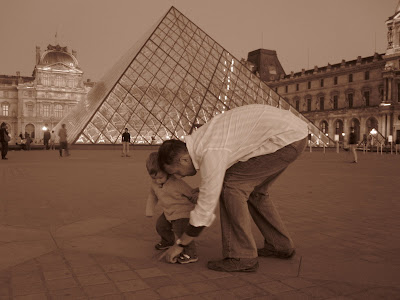 The Louvre at night ... it was nothing short of breathtaking! The camera had a hard time capturing pictures at night ... especially with Kelty moving so fast! This is the best we could get; Al had to pretend to point out a bug on the ground to get Kelty to stop moving! 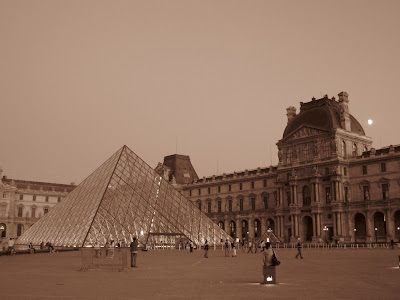 The Louvre was larger that we could have imagined ... it seemed to go on forever. We spent about an hour that evening just walking through the courtyard. At one point we came across a man playing his violin in a dark corner under one of the arches ... it radiated throughout the courtyard ... just a musician doing his thing but it really added to the experience.
Sunday: Because of Kelty's 3-hour nap on Saturday, we weren't able to tour the inside of the Louvre that afternoon. Instead we decided to stop by and see what we could on Sunday before we left. By Sunday morning Kelty really had enough of sitting in his stroller ... and really ... the Louvre is not child friendly (as you can imagine). So Al and I navigated our way straight to Venus de Milo (Aphrodite) and Mona Lisa. Without a child the Louvre was overwhelming ... with a child it was near impossible ... but we were happy to see what we did and decided that we'll see the Louvre again maybe when ... (uh hum, grandparents visit and Al and I can sneak away for a couple hours). 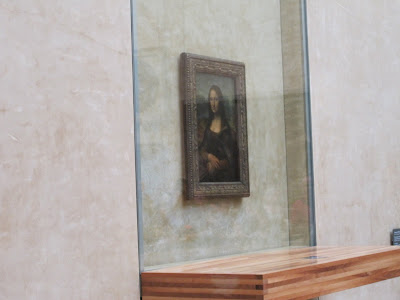 The Mona Lisa! You can't get close and you have to fight your way throught he crowd to get a good look ... but it was truly amazing.
And that's a wrap on this trip to Paris. Kelty is sick with a cold ... you can only keep a child so clean with wet wipes and hand sanitizer ... public bathrooms ... clean public batrhooms are not easy to come by in Paris. I paid 2 Euro just to change Kelty's diaper in bathroom!
by Unknown