So ... the other day I layed out Kelty's play blanket and went to make my morning coffee; almost immediately I heard "mmmm, hhmmmm, mmmm" coming from the blanket ... I peeked to see what Kelty was "mmmm'ing" about ... he was chewing on Pogo's dog bone! Ahhhhh! He had managed to squirm his way to the edge of the blanket where Pogo's bone had been (of course I hadn't noticed it when I layed down the blanket) and munch on a real bone! I guess he's not a picky eater! Hah!
I have a few photo's and video's to share with you this week ... Kelty's 6-month photo's are ready to be picked-up today. I think I may make the drive to Lawton (1-hour) to get them. Here is a sneak peak! 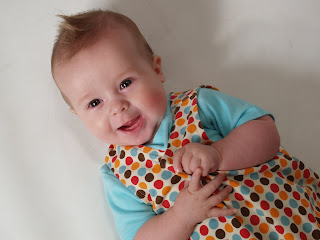 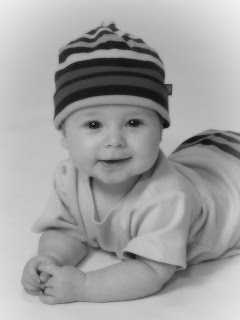 Kelty is really getting mobile! He does the little "low-crawl" to scoot around the floor ... I think I may call him "scooter". He does get up on his hands and knees now but he usually falls right back down. He is able to push himself up into a little "down-dog" though .... it's cute! I tried to load he videoftr 8 hours ... I gave up.
by Unknown No comments:

What an absolutely crazy few days ... to say the least!
We caught Pogo munching on something in the TLF when we were moving in on Tues ... thought maybe it was a "hidden" dog treat from the previous occupants and their pet. We wouldn't be so lucky ... whatever it was gave Pogo a bacterial infection, the equivalent to food poisoning. $170 dollars and 4 days later Pogo is almost back to normal. Poor little guy.
We experienced our 1st tornado Thursday evening, shortly after our vet visit ... Altus was hit immediately outside the base ... in fact they think the base may have taken one as well. Early evening on Thursday we had some rain and thunder; it was cute, the kids at the TLF were playing in the rain. We bathed and put Kelty down at 7pm and almost immediately afterwords the tornado sirens sounded ... so of course we did what every smart person does ... we ran outside to see the weather! Al walked out and joined a group of people standing in the grass between the lodging buildings and I watched from the doorway as they all pointed and stared. Curiousity got the best of me and I took a few steps out into the grass to see what everyone was pointing at .... a mass of swirling clouds directly over our heads! O'Crap! Almost simultaneously the base emergency broadcast system interrupted the television programing and advised Altus AFB personnel to take shelter immediately. Al and I ran into the TLF, grabbed Kelty, rounded up the dogs, grabbed blankets and a flashlight and settled rather uncomfortably into the bathroom. Let's just say there were some interesting sounds coming from outside the building and a bathtub gets very cramped with 2 adults, 1 baby and 2 chihuahua's! We stayed tucked inside our make-shift shelter for a decent 1/2 hour ... we are still without power (today is Sat) ... we are not expected to have power until at least Monday. After suffering through some very hot nights in a non-A/C'd TLF and 100 degree weather, we decided to make the best of it and check out Oklahoma City for a few days. Ahhh ... A/C and lights ... and internet! Here are a few photo's of post-tornado damage taken right outside the base. 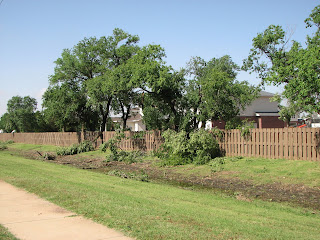 Across from our TLF 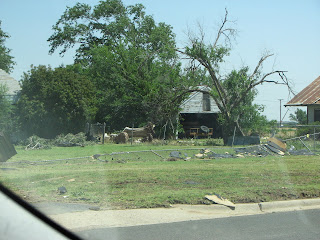 Just Outside the Base 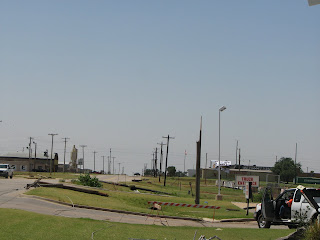 Power Lines Down - Outside the Base
In other and even more exciting news ... Kelty said his 1st word on Friday! "Mama" I could not stop smiling this crazy smile when he said it ... you could tell he was focusing so hard to get it out! I don't know that he actually associated it with me, but ... it's a start. I was able to catch some on video ... it wasn't his best but it was still great! Whoohoo! Let's hope it uploads!
by Unknown No comments:

We've made it through our 1st week at Altus ... it's been a long week. Kelty had his first cold; the pediatrician on base wanted us to let it run its course. The nasal suction bulb has been a frequent visitor to Kelty's poor little nose. We've finally settled into our pet-friendly TLF (after a few frustrating moves). Here are a few snapshots of the week. 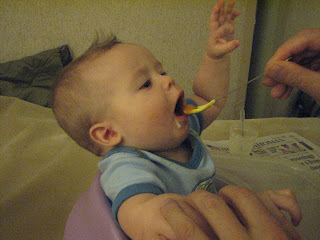 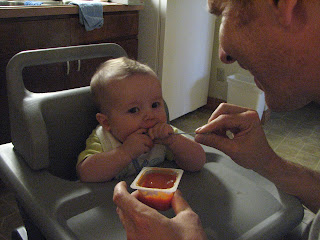 Carrots aren't so bad!
This was also Kelty's 1st time in a high chair.
The TLF's on base have high chairs in the room ... of course I sterilized this before Kelty even came near it! This is especially convenient since Kelty wiggles his way out of the Bumpo seat now!

by Unknown No comments: